We had left our hostel a bit late to go out for dinner, but we managed to find a place that looked quite nice. It turned out to be a hot pot place, and as we were arriving right around closing time, we received more than 50% discount, so we paid 172 yuan (162 kr) in total for A LOT of food for the both of us. We had never tried hot pot before, so we were a bit confused, but the Chinese lady in the restaurant was very helpful. Firstly we ordered two types of soup (we picked a spicy and a chicken soup), then picked a type of sauce we would like (we picked hoisin sauce) and then some meat we would like with it. We weren’t completely sure how much meat we should pick, so we just pointed at three types.

Then the food started arriving. Firstly our hoisin sauce, followed by a tray of various cut vegetables we could add to the sauce. Then sushi. Then dessert. Then a big bowl of various greens. Then two trays with different snacks. Then deep fried chicken wings and fries. Then the two soups, placed on a gas burner on the table. And then lastly the meat – two types of beautiful thinly sliced beef and some thinly sliced chicken. We couldn’t help but laugh a bit, as it seemed like an extreme amount of food. It then also turned out, that drinks were included in the price, so we could refill as much soda as we wanted too.

We could then start eating, by preparing our own food. The meats were dipped in the soups and then eaten with the hoisin sauce. Absolutely delicious dinner, in a new and interesting way we haven’t tried before. As we were almost finished, the waitress came to ask, if we wanted more meat too, but we were already full. As we were eating, we managed to understand from the menu, that it is basically all you can eat for 100 minutes. Definitely something we will try again!

As we walked to the restaurant, I saw something that looked like lightning, and as we were almost about to leave the restaurant, we confirmed that I was right – the storm was coming! It was suddenly raining like crazy outside, and we had left the hostel in nothing but short, t-shirt and ourshoes. When we couldn’t wait any longer, we went for it outside, running from umbrella to umbrella, until as we were waiting under one, a man came and offered us two umbrellas for 30 yuan. Probably overpriced, but with that amount of rain we didn’t care to haggle with him. Now that we could at least keep ourselves relatively dry, the next problem was our feet. Our street had turned into a small river, so wet shoes were inevitable. 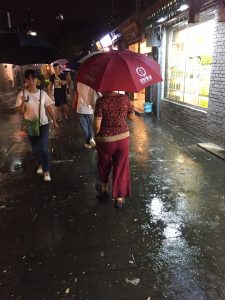 We are now back in our room again, put our shoes to dry and ready for a good night sleep after a long day.