We started our day late, really late, around noon. We both had a hard time getting up in the morning, so we decided to just relax a bit. First, we went to Beijing West Railway Station to pick up our tickets, as we are leaving to Xi’an after tomorrow. The building itself looks really amazing, it is huge and it is a mixture of old and modern china, more like what we imagined the whole city would look like.

After getting our tickets, we headed to the National Center of Performing Arts as we had heard it was a really nice building. From there we walked to Tiananmen square, which has different communist monuments, and there is a great view from there to Mao’s picture on the side of the Forbidden City. The size of the square and the buildings around it is breathtaking.

Then we left to visit Wangfujing street, and this was the most interesting part of our day for sure. It’s a huge shopping street, from which opens an alley, packed with people selling food. Now that is not so special so far, but they were selling things like fried scorpions, seahorses, starfishes, lizards, spiders and many other things we couldn’t even identify. A lot of these were still alive, presented on the skewers, before being fried. It was absolutely disgusting. My stomach had a hard time staying on that street, while Simon enjoyed taking pictures of all those weird things. We didn’t end up trying any of the things, we weren’t brave enough. We had fried ice cream instead, and Simon tried something with turkey in it.

By the time we walked around in the area it was time for dinner, so we decided to drop some of our stuff down in the hostel, and then we went to find a good place to try Peking Duck. Rita suggested a restaurant on our first day, so we ended up going there. The restaurant was in the basement of a building, and when we stepped in, there were a lot of people waiting to get in. There was a man standing by a computer, who gave out numbers to the people arriving, noting down how many people the group consists of and at the same time reading out the numbers of the groups that got a table, so his helpers can walk them to the table. We got our number, and were told that we will have to wait about 20minutes. About 25minutes later we had a table, ordered half a Peking Duck. We were told that people would usually order half a duck first and two more normal dishes and then upgrade to a whole duck later if they want more, but we decided to just stick to half a duck. First, we got duck skin sliced thinly, that we had to dip into sugar, and eat as a starter, and it was weirdly delicious. Then we got some pancakelike things, that served basically as a wrap, and we also got some sauce and thinly sliced cucumbers, and something that I assume was a type of onion. The duck arrived as well, super thinly sliced. A waitress came to our table, and showed us how to assemble our food. First put a pancake on the plate, put a slice of duck on it, the take another slice of duck and dip it in the sauce and place on the other piece of duck, then place one more piece of duck on top, and then place a slice of cucumber and 2 slices of onions next to the meat, and finally wrap it like a mini burrito. It was so so delicious! While we were eating, there was also a little show going on with all kinds of short performances.

Once we finished, we went for a little walk before heading home. We got some desert, which was green tea ice cream served in a pot, with crushed chocolate cookie on top and some rock candy and mint, it looked like a mini bonsai, and it came with a mini shovel, so we can shovel it in (haha). 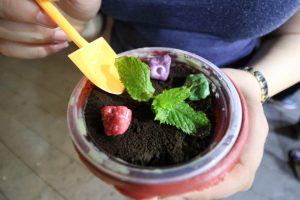 Then, on the way home, also according to Rita’s suggestions, we decided to try something weird. It is a creamy thing covered in a furry looking thing. Now, the cream is sweet, but the fur is meat (we choose one with beef). It was so weird, we only had one bite each and then gave up on this weird dessert. First the meat felt like hair, then it kind of melted and became this chewy, salty and very strong-tasting thing, which then mixed together with that sweet cream gave an absolutely unpleasant taste. We tried though! We had to get a frozen yoghurt quickly to flush down the weird taste. 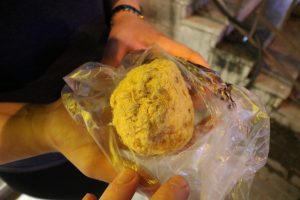